Tales of the Laramie Depot Safe

There comes a point in each fiction writer’s life where he wonders if it is even possible for him to put his money where his mouth is. Certainly I had picked locks as a hobby for many years before I set out to write Boxman but, as one might expect, I had very little “hands on” knowledge about Safe Cracking other than from my research. The reason should be pretty clear. It is cheap enough to go buy a few locks to practice on but doing the same with safes quickly becomes cost prohibitive. Then one day an oppertunity fell in my lap to put my money where my mouth was. This is the tale of what transpired….

My father, now retired, has become the president of an organization that has refurbished my home town’s old Railroad Depot.  Inside this depot is a now defunct Well’s Fargo office and in that office is an old safe. I asked one of the Depot Board members about it and found out that the combination had long been lost. It was clear that the safe was an antique an the local Lock Smith could not guarantee opening the safe without possibly damaging the safe. We can assume that the safe itself is probably worth much more than anything that might have been left inside otherwise a locksmith would likely have been called years ago, likely before the safe was even an antique! So without a guarantee, and without an offer of donated work(Quite an important consideration for small museums on a small budget) the safe has just sat.

For me this is an opportunity to apply some of my vast book knowledge on safe cracking to use without risking jail time! (Though my characters may be willing to risk life, limb, and jail for their adventure I assure you I don’t have the stomach for hard time.) So I got to work. I quickly found out that the rules behind an antique safe were quite a bit different than a modern one. I knew that the standard safe dial mechanism used today was invented in the 1860s. For a basic understanding of how to manipulate a safe like that feel free to brows the How Stuff Works article on safe cracking.

So after examining the safe I identified it, by the label on the dial) as a Hall’s Safe and Lock Co. Cincinati Ohio.It may not seem like much but this actually gave me a lot of information about the safe. For one, I learned that in 1893 the Hall’s Safe & Lock Co. lost the right to use its own name in a legal case. It was a confounded case having to do with the father trying to merge the business and, after his passing, the sons tried to begin again independently. The details are not too important other than to point out that after the 1893 case Hall’s had to drop the apostrophe and just call themselves the Halls Safe & Lock Co. Because the Depot’s safe still has the apostrophe I could then identify it as a safe made prior to 1893.

My first and biggest mistake was assuming that the design of the lock would be similar to the modern Sargent & Greenleaf  6700 series combination lock. The basic design of the S&G 6700 has remained virtually unchanged since the 1920s and the basic features of that lock date back to the Civil War. The other major design of a combination lock is what is called a direct drive. A direct drive lock is essentially what is used on a Master Lock combination lock.  I could get into technical details as to the difference (and I may in the future) but for now what is important is that the two require very different methods to manipulate. The best way to know one from the other is to simply apply pressure to the handle of the safe. If you have a direct drive you will feel tension in the dial as you rotate it. The S&G style won’t have tension in the dial because the actual retracting lever rests on the wheels inside the lock and simply drop into place with the right combination.

When I tested the Depot safe originally I didn’t feel any tension on the dial so I assumed that I was working with a modern style lock. I went through the complicated methods, briefly described in the How Stuff Works article, with little success. I then spread my feelers out and asked about and was sent some interesting pictures of the inside of a Hall’s vault lock. As I peered at the pictures I noticed that it looked more similar to the insides of a Master lock(direct drive) than a modern S&G 6700. I then returned to the depot and double checked the tension on the handle. This time I applied a tug on both the right and left handle and suddenly I felt the combination wheel bog down. So now I knew I was dealing with a direct drive lock!

The basic method for cracking a direct drive combination lock is by measuring the difference in depth the handle moves along each number on the dial. A direct drive lock works on a pretty simple principle. The dial is attached to a spindle which turns a series of disks(called Fly Wheels) inside the lock. On each fly wheel there is a gap cut out which corresponds with its combination number. When all of the gaps on all of the fly wheels line up the bolt that the handle operates is free to recede into the gaps and thus open the safe.

Because no machined product is perfect each fly wheel is slightly different in size. By carefully measuring how far the handle of the safe turns at each number on the dial you can theoretically determine the location of each gap in a wheel. This is generally done by attaching a wire to the handle and taping a ruler to the safe where the far end of the wire reaches. This amplifies the movement in the handle allowing you to accurately measure how far the handle moves. You can then graph the results at each number along the dial. The points where the handle moves the most likely correspond with the combination on the dial. 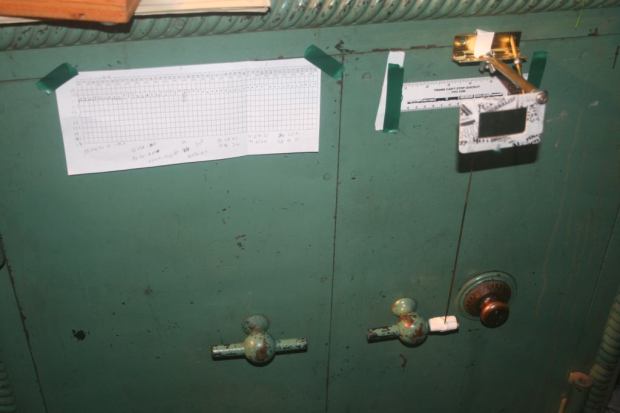 A needle attached to the handle is used to show amplified movement when tension is applied. The ruler is used to measure the amplified movement. The magnifying glass is used mostly so I can ensure that my head is in roughly the same spot for each reading I take. I line the green tape up on each side of the viewing glass, To the left is the chart.

My first attempt was unsuccessful but left me with some tantalizing clues. I began by turning All Wheels Left(AWL) and charting the handle movement. I got the most movement in the handle at position 24 and position 91. I then went through a process to see if I could determine which wheel each number corresponded to. To do this I dialed up each number twice and an off number(in my case 50) on one of the three positions. So, for example, I would dial 91,91, and 50/ 91,50, and 91/50,91, and 91. I measured the needle result at each location. Where the random number lies,(the 50) is the indicator number. In theory you should see the needle move less in one of the three combinations. In my case the needle moved the leased when the 50 was in the second position. That indicates that the 91 is likely the second wheel. If followed the same process and the 24 indicated the least movement on the third wheel.

A close-up of the first chart that shows my progress and my work.

So now I charted another graph. This time I dialed up the numbers in 2.5 incriments followed by the 91 and the 24. I was hoping that if I 91 and 24 were indeed numbers on the dial, and if I put them in the right spots, that getting them out of the way by parking corresponding wheels on them would help me find the final number. Sadly the chart I drew was practically a straight line. There was a very minor indication at the number 55 so I tried 91, 24, and 55 in all possible iterations but nothing.

I was disappointed but anyone who has been in one of those “just around the corner” situations knows why I pushed on. It seemed so close! I then just started fiddling with the dial. I notices that with tension on the dial it moved similar to how a Masterlock combination lock moves when you tug on the shackle. A Masterlock does this because it has a very primitive “anti-manipulation” device built in. The first fly wheel is shaped like a cog. This means that it gives a series of “false” indicators as you attempt to manipulate it. If the lock I am dealing with has a something like this then it means that the entire first graph may need to be thrown out. The 91 and the 24 may just be reading low points on this cog shaped wheel as oppose to reading gaps of the fence gates in the other wheels. What I would then need to do, in order to get more accurate readings, is start a new graph by continually parking the dial at the low point in the coged wheel. Sadly by this point I just had to walk away. One thing I learned from this first attempt is that safe manipulation is one of the most mentally exhausting challenges of my life! I’ll be back next week to have another go. In the mean time I’ll just reflect on what I have learned so far and plan the next attempt!

While working on an unrelated book about the Railroads of Albany County I came across some information about the famous Wilcox Heist. This was the heist pulled off by Buch Cassidy and the Hole in the Wall Gang that was made famous in the Paul Newman and Robert Redford movie. The scene in which the entire rail car is blown up was taken from the real heist that happened in Wilcox Wyoming in 1899. Below you can see pictures of the car and the safe as well as a photograph of the Pinkerton Posse hired by the Union Pacific Railroad to hunt down the gang. I found it quite interesting to note that the safe blown up is actually quite similar to the one I am working on now. So If I do manage to open this without blowing up the Depot along with the safe I will have at least one feather in my cap that eluded Butch & Sundance! 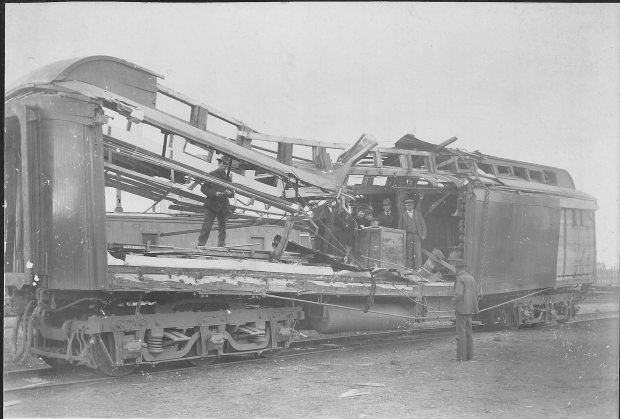 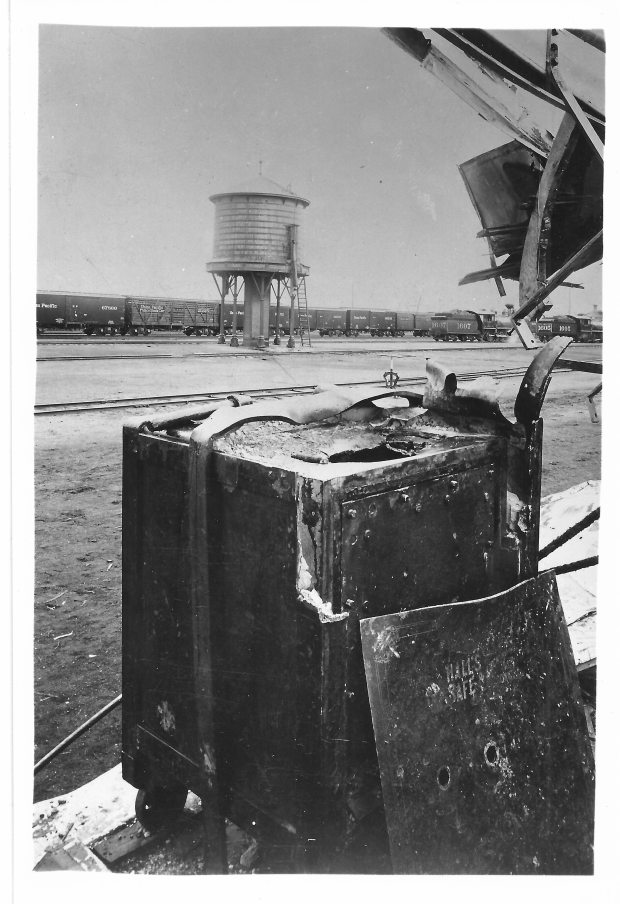